Best Way to Predict the Future is to Create It

With over 90% support of voting members, the 68th General Service Conference (2018), for USA/Canada, adopted and approved the pamphlet “The ‘God’ Word; Agnostics and Atheists in AA.” What has changed inside and outside of AA in such a short order?

Rebellion Dogs Publishing and AA Beyond Belief are teaming up soon for a detailed look at the long road that brings this pamphlet to our home-group literature tables. I’m looking forward to that presentation which I hope you will find entertaining and informative.

This is not that.

Background: Just a few years ago, under the stewardship of then-chair of the General Service Board, Rev. Ward Ewing, the trustees’ Literature Committee had collected agnostic and atheist stories from Canada and the USA to create a home-made pamphlet. The format was like others, welcoming other underrepresented populations in AA: youth, the LGBTQ community, African Americans, women, indigenous people, persons with disabilities and/or requiring accommodation, etc.

This noble endeavor failed to illicit the 2/3 majority that any advisory action requires on the General Service Conference floor. Instead, the rejected pamphlet was replaced with a working title pamphlet called “AA: Spiritual not Religious,” which would eventually be affirmed as “Many Paths to Spirituality.”

How did we get from “the nays have it,” a few years ago, to “yes we will,” this spring? 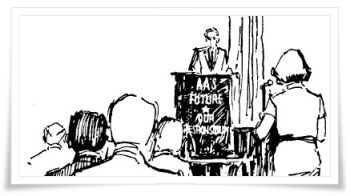 Here’s where our General Service Conference stood in 2011:

“…the trustees’ Literature Committee continue to develop literature which focuses on spirituality that includes stories from atheists and agnostics who are sober in Alcoholics Anonymous. The committee expressed support for the trustees’ efforts to develop a pamphlet which reflects the wide range of spiritual experiences of A.A. members and asked that a draft pamphlet or progress report be brought to the 2012 Conference Committee on Literature for consideration.”

As history recalls, the draft agnostics and atheists pamphlet didn’t get the substantial unanimity that “conference approved” requires. Instead, in 2014 we ushered in, “Many Paths to Spirituality.” Personally, I think “Many Paths” is a pamphlet with merit; but it falls short of satisfying the unmet need of atheists and agnostics stories in our own language. If other underrepresented populations have such a pamphlet, why not us?

In Laval Quebec, the biennial Eastern Canada Regional Forum welcomed feedback from members in 2014. I remember asking Class B (alcoholic) literature committee trustee Joe D, standing at the podium, if the view of AA World Services Publishing was that “Many Paths” met the need of agnostics and atheist seeking a pamphlet. Joe D replied that, “Yes, ‘Many Paths’ was thought to satisfy the unmet need for atheist/agnostic literature.”

I respectfully offered that in my discussion with members from my atheist/agnostic home group to the larger online secular AA community, it is widely felt that “Many Paths” does not satisfy our request. We still feel, literature with nonbelievers expressing what it was like, what happened and what it’s like now, belonged alongside, “AA for the Woman,” “AA for the Gay/Lesbian Alcoholic,” “Young People and AA,” “AA for the Native North American, “AA for the Black and African American Alcoholic.”

Amy B of Grapevine and other Grapevine staff were in attendance. That’s when the idea first germinated for a previously published Grapevine atheist and agnostic stories be collected for a book. First, they got home from Quebec and put out a call to readers to tell our agnostic/atheist stories for the October 2016 issue of Grapevine. This Fall (2018), Grapevine books will include a collection of some of these stories and previous Grapevines going back to Jimmy B and other contributions.

Through other regional forums and communication between AA groups and meetings with the General Service Office, it was affirmed that there was still an unmet need. I am sure that several of you, reading now, had your say. AA owes you a debt of gratitude for speaking up; if nothing happens, nothing happens.

Meanwhile, the General Service Conference of the United Kingdom, which has the autonomy to create any literature requested by their own constituents, drafted a collection of atheist and agnostic AA stories from Britain. In 2016, “The ‘God’ Word: Agnostics and Atheists in AA”[i] was conference approved.

“The ‘God’ Word” contains ten stories of experience, strength and hope. Some of these include recoveries from alcoholism in AA without our literature or 12-Step process. Other stories include experiences of adapting theistic Steps with more secular higher powers such as the AA group, the power of example, the healing power of one alcoholic talking to another. Unabashedly, “The ‘God’ Word" stories are told the same way believers stories go, take what you like (what works) and leaving the rest.

As we’ve discussed before the General Service Conference has a president for adopting British conference approved literature for USA/Canada. In 1980, “A Newcomer Asks” became part of the USA/Canada literature offerings. “A Newcomer Asks” is the second most ordered pamphlet, next to “Is AA for You?”  This year, our General Service Conference approved the following advisory action:

The pamphlet “The God Word” (currently published by the General Service Board of A.A., Great Britain) be adopted by A.A. World Services, Inc. with minor editorial changes.

If you’re wondering what has changed so dramatically in mood and attitudes inside AA over just a few years, let’s consider how moods and attitudes are changing in America, where a little over ½ of AA’s approximately two million members go to meetings.

Tobin Grant blogs for Religion News Service at Corner of Church and State, a data-driven conversation on religion and politics. He is a political science professor at Southern Illinois University and associate editor of the Journal for the Scientific Study of Religion.  In March of 2015 in The Christian Century, Tobin Grant reported on the following changes in Americans beliefs and behaviors:

To a more secular audience, in The New Republic,[iii] Isaac Chotiner points out that demographic changes are no changing of the guard. There is no score to settle, even if that’s to the chagrin of the anti-theist camp of secularism. Chotiner concludes his essay this way:

“The truth is that this wave of secularism, like previous waves of secularism, will leave believers in perfectly fine shape. Religion, much to the dismay of diehard atheists, has a way of adapting itself to current conditions. This era will prove no exception.”

Some of the discrimination that nonbelievers have suffered in AA and other 12-Step meetings comes from an ignorance that nonbelievers will become believers if they open their mind. Some discrimination is from a secularphobia that sees irreligion as a threat to the majority faith-based Americans and/or AA member. But Chotiner’s conclusions are that we’ve been here before, secularism isn’t contagious. To the grounded theist, secularists having their say or their own space is no threat to any true-believer. Perhaps in AA, there is more of a unity vs. uniformity vibe and less of an “AA under siege” fear.

Consider that this vote wasn’t nonbelievers outvoting believers on the General Conference floor. The "yes" vote was inclusive-minded AA’s wanting everyone to feel included. Any slippery slope dread of what might happen if vulnerable newcomers are exposed to secular AA literature, has dissipated with moderate AA members. “The ‘God’ Word is blunt, but it doesn’t throw stones at traditional AA. The stories display a range – from those who disregard the 12-Step process to those who adapt strongly held AA tenets about powerlessness and power-sources to more behavioral/educational narratives of overcoming “a seemingly hopeless state of mind and body.”

If AA reflects a cross-section of the world outside our meeting room doors, then fewer AA’s hold a supernatural view of what “a power greater than ourselves” means to each of us, personally.

Also, if AA is like the rest of the community, apostacy affects some of our membership. In the rooms, I hear about members jumping into the AA idea of a loving higher power listening to our prayers and sending guiding messages. Some of us were outspoken about letting go and letting god (of our understanding). Gradually, some of us outgrow this conception of an intervening higher power. This isn’t to say a secular worldview is more evolved that a supernatural worldview. The point is that a secular approach to AA is no longer considered an intellectual holdout. Not-god is a perfectly workable view to AA sobriety.

And the world we live in isn’t just theists vs. nonbelievers; some religious adherents don’t believe in an anthropomorphic higher power and others who believe in such an intervening supernatural power, don’t envision a “Him.” The creator is not called, “God” by all theists.

From the Washington Post in 2014, Reid Wilson looked at the second-largest religion (next to Christianity) in each State:

“In the Western U.S., Buddhists represent the largest non-Christian religious block in most states. In 20 states, mostly in the Midwest and South, Islam is the largest non-Christian faith tradition. And in 15 states, mostly in the Northeast, Judaism has the most followers after Christianity. Hindus come in second place in Arizona and Delaware, and there are more practitioners of the Baha’i faith in South Carolina than anyone else.”[iv] 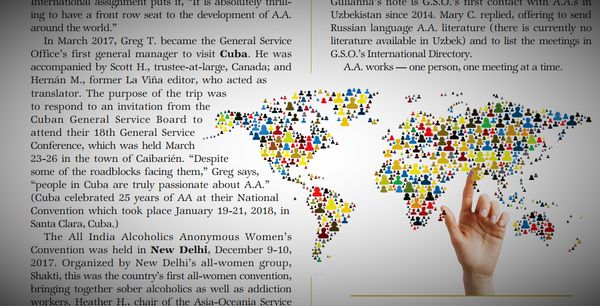 As for AA as-a-whole, AA’s greatest growth is coming outside the USA/Canada. Many developing countries are not monotheistical in their dominant culture. The Spring 2018 Box 4-5-9: News and Notes for GSO celebrated AA growth outside of our conference’s jurisdiction. Iran has 400 meetings, there was a women’s AA convention in New Delhi India, AA is growing in Uzbekistan.[v]

While we await the 2018 member/group estimates (posted Summer Box 4-5-9), the 2017 report showed that 50,555 of AA’s 118,305 groups and 705,850 of our 2,103,184 members are from outside the USA/Canada jurisdiction. Year-over-year, membership held firm with thanks to double-digit increases in new members, internationally. While monotheism is known worldwide, polytheism such as Hinduism and non-theism such as Jainism or Buddhism will continue to account for more of AA’s cultural background. It’s great to ponder, as we have accommodated non-supernatural worldview members, will we continue to accommodate a growing variety of views of AA recovery, both natural and supernatural?

In that first United Kingdom pamphlet that USA/Canada adopted and amended, one of the “A Newcomer Asks”[vi] queries is answered this way:

There’s a lot of talk about God, though, isn’t there?

“The majority of A.A. members believe that we have found the solution to our drinking problem not through individual willpower, but through a power greater than ourselves. However, everyone defines this power as he or she wishes. Many people call it God, others think it is the A.A. group, still others don’t believe in it at all. There is room in A.A. for people of all shades of belief and nonbelief.”

It would be interesting to poll members to understand who, A) “Calls it God,” B) think of it as the A.A. group” or C) don’t believe in it at all.”   Maybe a future triennial membership survey will ask us and then track changes in our beliefs through the years.

I’ll look for reader help in sourcing our closing line. Peter Drucker, Abraham Lincoln and Alan Kay are all credited for saying this:

“The best way to predict the future is to create it.”