January 2023 - what are the (scientific) odds of getting and staying sober?

Expectations lag behind outcome rates of recovery from addiction 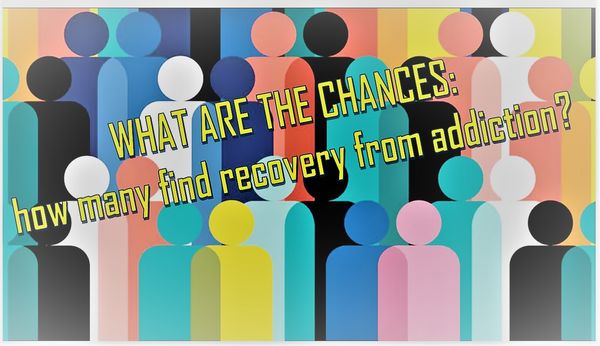 PRINT or READ a PDF copy

Shake any family tree and one or two drunks fall out of it; that said, this blog is of general interest to all. Who has never directly or indirectly been impacted by alcohol (and other drug) use disorder? Reporting today, we think, will be of particular interest to the ranks of the “sober-curious”—if you are struggling with alcohol (or other drug) use and thinking about recovery. Do you care about someone suffering from addiction? Are you in healthcare? This blog’s for you! We will address a key question: What are the chances of someone with a problem flourishing in sobriety?

Scientific data is available, for both people considering recovery from substance use disorder and those of us around along time who have depended on folk-wisdom and anecdotal evidence about the odds of recovery.

According to the Center for Disease Control and Prevention:

We will cover what life in recovery looks like—what do you gain, what do you give up—in  other blogs in 2023,but right now, what does science reveal about your odds of getting and staying sober?

There is a wealth of science—not just “marketing material” from this rehab or that inpatient treatment programs that compete for public and private healthcare dollars--but peer reviewed randomized controlled trials that provide unbiased reporting.

A researcher from The Recovery Research Institute and a professor of psychiatry at Harvard Medical School shared in 2021 what the findings reveal from hundreds of studies about addiction and recovery tested over several decades:

“Addiction is a highly treatable disorder from which the majority of people eventually recover. And our recent study shows that in spite of numerous legal and social barriers, most individuals in addiction recovery go on to rejoin society and contribute to it in numerous meaningful ways.”[ii]

Why are people skeptical or pessimistic about a claim that most people who seek recovery, find it? Numbers: what is the likelihood, in percentages, of achieving recovery from alcohol and other drug use disorders and how many attempts will it take to find lasting sobriety? This is what this blog is looking at—scientifically arrived at outcome rates based on randomized, controlled clinical trials. 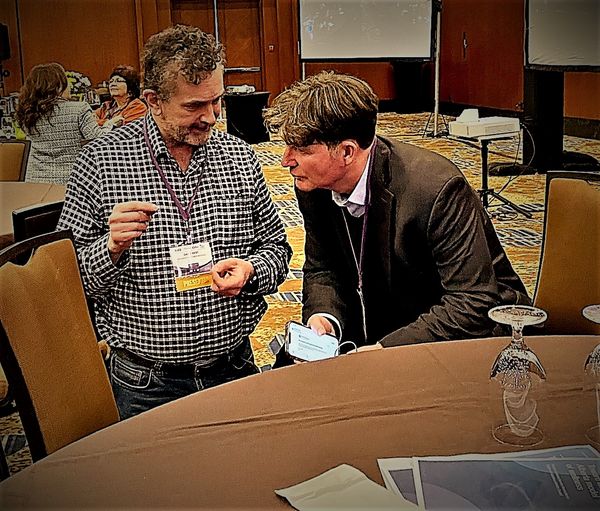 Professor of Addiction Recovery at Leeds University, David Best is seen above, at the Recovery Capital Conference of Canada in Calgary, April 2022, talking with Professor John Kelly, Addiction Medicine, Harvard U between sessions. Let me share a story Professor Best shared with healthcare workers and treatment professionals. After one of many longitudinal studies done with patients from rehabs and treatment centres in the UK, Australia and the USA, having compiled the research data and findings, and returning to these facilities to share the recovery outcome results with the professionals in these centres, Best first asked the professionals in addiction treatment, “What percent of your patients/clients do you think find stable, quality recovery?”

These professionals wrote down their educated guesses and/or empirical observations, the answers were given and tallied and averaged out. The expectation of professionals delivering addiction recovery services to those in need, their average guess of who would make it was 7%.

That's not even in the ballpark. Based on exhaustive reviews of the papers and studies available, the Cochrane Library Database Systematic Review average recovery over addiction outcomes was 58%. In another USA study by William White et al recovery success was just over 50%.

That’s quite a disconnect: over half of the patients treated in these facilities that formed part of results that David Best and his colleagues found in collecting data succeeded, while the healthcare professionals who helped us find recovery were pessimistic about our chances. This pessimism is widespread, and the objective data supports a reason to expect better outcome rates. Early this century, misinterpreted statistics compiled within Alcoholics Anonymous became misinformation repeated among media outlets and among gatherings of healthcare workers. What was widel said is that AA (being the only example talked about) had a 5 to 10% success rate. That's no greater than spontaneous recovery, people who just stop with no help from healthcare providers or mutual-aid groups. So what do today’s findings say about it?

The European Monitoring Centre for Drugs and Drug Addiction team up with Stanford and Harvard University in the USA for a systematic review of randomized controlled trials of AA, Twelve Step Facilitation along with comparisons to clinical interventions such as Cognitive Behavioral Therapy and Motivational Enhancement Therapy. There were 27 studies that met the strict scientific criteria and this data included over 10,000 subjects. The review concluded:

“Alcoholics Anonymous (AA) and Twelve Step Facilitation (TSF) interventions produce similar benefits to other treatments on all drinking-related outcomes except for continuous abstinence and remission, where AA/TSF is superior. AA/TSF also reduces healthcare costs. Clinically implementing one of these proven manualized AA/TSF interventions is likely to enhance outcomes for individuals with [alcohol and other drugs] while producing health economic benefits.”[iii]

So, we are a little better than 50% likely to find permanent, sustainable recovery from a previous diagnosis of alcohol (or other drug) use disorder; is that a half full or half empty glass? It is certainly way better than a 7% chance at recovery. Some of these studies demonstrate that a holistic approach is more favorable than a single intervention. In one study, 466 people diagnosed with alcohol use disorder were invited to choose one of four pathways (Timko, 2000):

Of course there are alternatives to AA in the mutual-aid world: She Recovery, Dharma Recovery, SMART Recovery, Life Ring, Narcotics, Marijuana and Cocaine Anonymous + others). What makes AA ubiquitous in clinical trials is it is almost everywhere: trials taking place in multiple cities or countries can find AA in various languages and communities and online.

But as for the people diagnosed with moderate or severe alcohol use disorder, everyone in the four groups showed improvement in the first year. But at three-year and eight-year follow ups, “Individuals who received some type of help—AA, formal treatment, or both—were more likely to be abstinent at 8 year follow ups, compared to untreated individuals.

Two different success criteria were used, reflecting multiple pathways. Recovery does not always mean total, uninterrupted abstinence. The Diagnostic and Statistical Manual of Mental Disorders (DSM-5) defines a maladaptive pattern of substance use leading to clinically significant impairment or distress, as manifested by at least two [of eleven] criteria, occurring within a 12-month period.”[iv]

With abstinence as the success criteria, eight years after entering the clinical trial:

But what is sober?

What is success? For some, any relapse is a time to start counting days again and analyze what went wrong. But what about non-abstinence recovery. I’m a straight edge, no mind-altering chemicals/substances abstainer. But not all healthcare workers are as concerned about my strict rule of continuous sobriety. My way isn’t the only way. Following the medical model of disease, remission from symptoms is successful--less cancer is good cancer treatment, less asthma is good asthma treatment. Above are the abstinence results from being previously diagnosed as moderate or severe alcohol use disorder (AUD). According to the DSM-5, two or three out of the criteria is mild AUD; four or five would be moderate; six or more is severe AUD.

So in our next set of numbers from the same trial, anyone who had remission (answering “yes” to two less criterion), are all considered successful outcome rates. Let’s look at these eleven criteria:

Of the 644 who entered the study everyone sober + everyone who met only one or two of the above criteria, eight years after starting their recovery journey, here are the results:

The National Institute of Drug Abuse (NIH) notes that alcohol and other drug remission rates are better than treatment for other chronic conditions such as diabetes, hypertension and asthma. After all these years in recovery and in the company of fellow travelers in recovery, I wish I could tell you one way that worked for everyone who needed or wanted it. One person’s cure is another’s poison. We can compare outcome rates but there is no “one pill” solution.

Odds are improved (you can improve your chances) by loading up on different models. As we see above, people who do two or more things (peer-to-peer support + formal treatment), do better than those who do one or the other. Surveys of people in recovery (USA 2013, UK 2015, Canada 2017) identify at least 18 types of things that people have done to get and stay sober, including detox, psychotherapy, medically assisted treatment, mutual aid (12-step and other), residential treatment, out-patient care, aftercare or other group therapy with a facilitator, religious/spiritual practices, podcasts, social media and smartphone apps, health and nutrition, etc. The average number of resources/aids utilized by everyone in the studies was six, with mutual-aid, counseling, rehab and detox being at or near the top of the list that included everything from better housing, pet-therapy, harm reduction and charity work.

Having "wise friends and mentors" as Refuge Recovery calls it, also improves your chances of maintaining your bottom-line behavior. In David Best's 2019 Pathways to Recovery and Desistance: the social contagion of hope, we see that, "Compared to standard aftercare, those who added at least one non-drinking members to their social network, showed a 27% increase at 12 months post-treatment in the likelihood of treatment success."

What do you need to benefit; where should you start? See what’s available; commit to several new activities including professional counseling and peer support groups. Get medical advice. Do you need medical detox or ran inpatient addiction treatment center? The more severe the addiction, the more intrusive the intervention should be. Go all in or start with a couple of helpful approaches and only add more if it isn't working. It’s not unusual to feel uncomfortable or wonder how these interventions will help in the short or long-term but stay with them, see how your attitude and hope changes after multiple sessions; in the spirit of John Lennon, "All we are saying, is give recovery a chance."

Another big question for people with addiction and those who care about us is, “Will there be relapse?” There is some data on that as well from Stats News (2021):

“The average number of attempts before success is five, though the median number is just two, meaning that a small number of outliers — usually individuals with the greatest addiction severity and other concomitant mental health issues — who need five-plus attempts, inflate the numbers, making them look worse than they are.”[v]

23 Million+ people in the USA alone are in recovery from alcohol and other drug use problems. Sobriety is not a lonely street in Loserville. But take the first step(s). Reach out to your healthcare professionals and talk to them about you read here and why. Visit Rebellion Dogs Publishing links page for podcasts, communities, links, blogs and support.

If you know you have a problem and you want to quit, if you’re just trying a Dry-January campaign, the odds are good.

[v] People recover from addiction. They also go on to do good things - STAT (statnews.com)