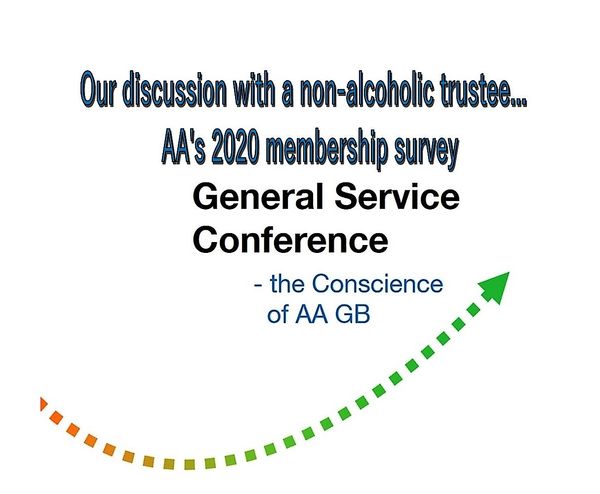 Mani is one of AA Great Britain’s non-alcoholic trustees on their General Service Board. Among other duties, Mani and his committee prepared the quinquennial AA membership survey which went out to Alcoholics Anonymous members in Great Britain and English-speaking Central Europe Region groups.

A remarkable thing happened as they prepared to put these questions before members: The COVID-19 pandemic. As members transitioned from primarily face-to-face meetings to online gatherings, here was an opportunity to collect data on how members were adjusting. The General Service Board did just that.

Here is what members shared.

The 2020 survey was the first to work with the Central Europe Region to collect data together.

While much of AA, as most of the world, adapted to a virtual, social-distancing means of interacting with each other, Zoom was not a better way of doing things for everyone. And some members were already attending phone or video meetings anyway. A few months into lock-down the key drawbacks among people who were not in love with ‘the new normal’ were: (i) a lack of technical skills, (ii)online meetings not a suitable replacement for face-to-face (f2f) meetings (33-36%), (iii) concerns about privacy, (iv) no access to bandwidth or IT devices, (iv) group was continuing to meet f2f.

The subcommittee adapted the 2015 Survey instruments as templates; previous items were retained. However, several new questions of interest were identified for exploration:

Last episode we explored survey results based on the written report. What added benefit came from speaking with the survey’s architect directly?

Well, personally, I had extrapolating some of this data from what it says to what it means; Mani’s scientific observations helped me reel-in some of the hypothetical conclusions I was already starting to draw. “That’s human nature,” he kindly suggested to me. But it was also reassuring to hear that the Board also did not have their full appetite satisfied and they would love to ask follow-up questions to try to direct their efforts most effectively.

The purpose of these membership surveys (in General Service regions such as Great Britain or USA/Canada) is: (i) inform the public and professionals that interact with alcohol use disorder about the demographics and other characteristics of AA members and meetings and (ii)use the data to inform the Board in terms of where their future efforts would best serve the membership of AA.

Mani and the General Service Board say they view with great interest how online AA will both aid the still suffering alcoholic but how virtual spaces will alter the service structure which has—based on geographical locations of members and their meetings before—divided groups/members by geography and how shall the service structure adapt to our more global makeup of meetings and member-interactions?

As we discussed at length in Episode 69 of Rebellion Dogs Radio, we now know more about the worldview of members (in this geographic area) and who applies AA through a religious and/or a secular view. It was eye-opening to hear about the personal significance of this new line of questions in the survey about worldview directly from Dr. Mehdikhani, and to hear how these findings inform the General Service.

On a personal note, I have not been so excited to share an interview with listeners for while. We have talked to other non-alcoholic trustees, General Service Board chair emeritus Ward Ewing (USA/Canada), for instance. It is not lost on me how complex the interaction is between mutual aid groups like Alcoholics Anonymous and healthcare is, today. Employee Assistance professionals, healthcare workers  and law-enforcement professionals, largely understand their need for a better understanding of the peer-to-peer recovery world. The generous time and expertise these non-alcoholic professionals lend AA, when they volunteer as non-alcoholic trustees, is vital to how we function. It also gives us—which I think is a  feature of Episode 70’s interview—an objective outsider’s view of AA.

Referred to in this podcast:

Read the Report to the General Service Conference

Listen to speakers/panels/workshops from the fifth biennial International Conference of Secular AA.